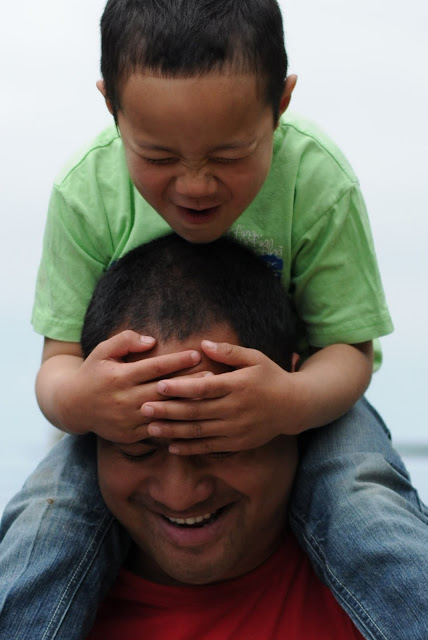 Some months ago, I entered the on-line world of blogging, Twitter, Facebook, and most recently Pinterest, and have since found so many wonderful stories about playtime. It's heartening to see today's time-strapped parents taking such an active role in their children's play, and so many dedicated early childhood educators sharing their innovative ideas for play-based learning.
But one story in particular stood out for me the other day.
Amy (@babybabylemon) tweeted...
"Spencer has decided he has a "play button."
I push it and he runs around and goes crazy."
I laughed right out loud. Pure kid logic. It's these head-scratching, where-did-he-get-that-idea stories that continually reaffirm my belief in the inherent wisdom of a child's imagination, and of parents who, like Amy, instinctively honor and trust in that wisdom.
But more, this got me thinking about the eloquence of Spencer's invitation to play. DO YOU KNOW THE SECRET PASSWORD?
Children's free playtime is precious, especially these days when kids are often on as tight a schedule as we are. Kids need time on their own or with their friends and siblings to play and explore as they see fit without parents, teachers, or caregivers getting in the way.
So when is the right time for parents to join in the fun?
Just like anyone else, according to the rules of play etiquette, it's best to wait to be invited in... to be given the "secret password." After all, nobody likes a pushy playmate (unless, of course, safety becomes an issue). And this rule especially applies to parents for one really important reason... you're bigger than he is. By kid standards, that makes you in charge (even on his most defiantly independent day).
But note, this doesn't mean that you shouldn't invite your child to play with you as well. It simply means that when he's enjoying his own free play experiences, you should honor and respect that time as his own. 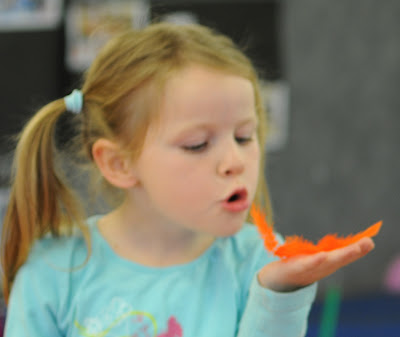 PLAYING BY THE RULES
As you know, there are plenty of times in life when we are not in charge... school, work, sports, and so many other situations are governed by a set of pre-determined rules and explicit or implicit expectations. The one true place we can be ourselves is when we play, and that's especially important for little ones who spend the majority of their time abiding by other people's rules. During free play, your child needs to have control of what he's thinking, feeling, imagining, and doing. Intruding on that not only takes away the freedom to be himself, it runs the risk of making him feel his way of doing things is somehow lacking or in need of correcting... something he likely gets to a greater or lesser degree in all the structured, supervised parts of his day.
And yes, before you get the wrong idea, children do need structure and supervision in important matters such as academics, good manners, personal hygiene, etc. But when it comes to hosting a tea party, building a fort, making mud pies, donning a cape and cowl and chasing after the bad guys, or creating his own personal play button, that's pure kid turf and unless you've been given the secret password, KEEP OUT!

THE INVITATION
Your invitation to play may come in the form of a tug on your pant leg, a simple question, a "show me how" request, or those five silly words, "Please, press my play button." Whenever you sense that your child wants your attention, give it freely. A child's invitation to play is no small thing, and is issued only to his most trusted companions.
When the two of you make time for each other, he can feel comfortable to share his inner most self with you, and you with him. And that's where the big belly laughs, unbreakable bonds, and unforgettable family stories come from.
So once you've been invited, remember it's a "come as you are" party. Be yourself... not your mommy or daddy self, but you as playmate and friend to your child. No matter who issues the invitation, as we've said before in our post Parents Make the Best Playmates, your role is to follow wherever your child leads the play.
And when you do that, you're pushing all the right buttons.
Thank you, Amy and Spencer for inspiring me and giving me a play button of my very own. I promise, I will use it often! 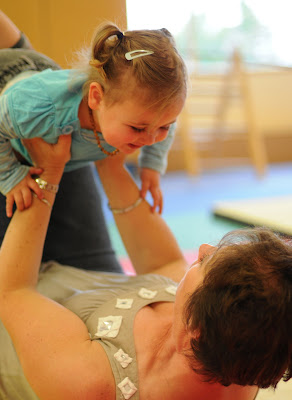 THE PLAY BUTTON
Amy and Spencer shared a wonderful story of spontaneous, imagination-generated play. That kind of play might last an hour, a day, a week, or even longer. When your child invents something as fun and silly as making up his own play button, go with it and have fun with it too.
And if it does last a while, consider how to make even more of it to extend the fun a little longer, or maybe even add a little covert learning along the way. For instance, to expand on Spencer's original inspiration...
After you've played the original "Play Button" game for a while, you might wonder aloud...
"I wonder what would happen if I press the play button on your nose?"
Watch and see what happens. If he takes your cue, now he has two play buttons! If he doesn't, abandon the idea for now. In other words, don't push it (pun intended).
If he does allow your idea in, try another twist. For instance, you might want to add, "I wonder if I have a play button? I wonder where my play button would be?"
If the two of you get really good at the game, you could have all kinds of play buttons that you make up between the two of you. For instance...
My elbow is the "Super Speed" play button.
My nose is the "Go Backwards" play button.
My belly button is the "Jump" play button.
My big toe is the "Go Slow" button.
And of course, the top of my head is the "FREEZE" button.
And don't forget. Granny's got a play button too! (At least this one does!)
Please follow Amy's lemony adventures at...
Blog:                http://babybabylemon.com/
Twitter:            @babybabylemon
Facebook:      Baby Baby Lemon on Facebook
Pinterest:         Baby Baby Lemon on Pinterest
Posted by Gill Connell Cheryl McCarthy at 8:17 PM